Hansen was engaged by the Ministry of Construction, Vietnam to work with government planners and engineers in the review of the draft Hanoi Capital Region Plan, 2030 which was prepared by VIAP. The review aimed at ensuring the regional plan adopted best practice in regional planning and, ensured the integration of social, economic and environmental considerations to create a sustainable region. The Hanoi Capital Region consists of the City of Hanoi and seven neighbouring provinces – Ha Tay, Bac Ninh, Vinh Phuc, Ha Nam, Hai Duong, Hung Yen and Hoa Binh. The region accommodates approximately 13 million people and forms part of the Northern Economic Zone of Vietnam. 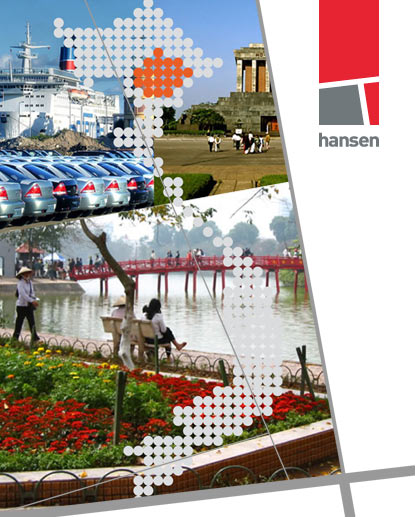 The Hanoi Capital Region Plan includes a comprehensive assessment of the Region in Context highlighting the changes currently occurring in the region in terms of population, housing, the economy, transport, infrastructure and the environment. The evaluation of the region embraces a SWOT analysis which was facilitated through working sessions with the VIAP team and additional data collection, where required.

Within this context the regional plan adopts a strategic framework underpinned by the principles and practices of sustainability. Ten Principles are applied to the region they being liveability, diversity, competitiveness, co-location and clustering, linkages, integration of infrastructure, natural environment and biodiversity, learning and innovation, partnerships and good governance and leadership. From these principles and a sound appreciation of the region’s key characteristics a Vision Statement for the Hanoi Capital Region was identified. The Vision statement incorporates six strategic themes for the Hanoi Capital Region (for example, a Region of National Significance, A Region of Economic Prosperity and Innovation) with each theme identifying objectives, initiatives and actions to the year 2030 and beyond.

An integral part of the project was to identify an appropriate regional planning structure for the implementation, monitoring and review of the Hanoi Capital Region Plan, 2030. A paper on regional planning models was presented at a workshop involving national and government officials from which a recommended structure was incorporated in the regional plan based on a regional development authority model.

The Hanoi Capital Region Plan, 2030 was approved by the Vietnam National Government in May 2008.